Donegal: Official launch of the Ancient Clans website and The Battle of Benburb Film Donegal Castle

The official launch of the Ancient Clan website and The Battle of Benburb Film took place in Donegal Castle with opening welcome by Michael Naughton- Leas-Chathaoirleach of Donegal County Council.

This website has been developed through contributions from Donegal and Mid Ulster heritage Forum whose members have been involved in workshops and site visits over the 2 years of this cross border programme.

This exciting initiative is supported by the EU’s PEACE IV Programme and managed by the SEUPB. This project was awarded €140,000 under the thematic approach Building Positive Relationships element delivering an action plan based upon a Peace IV Cross Border Shared Community Heritage Programme.

The Website heralds the beginning of new and meaningful relationships both across Mid Ulster and Donegal Forums but as is evident with the increasing interest shown across the Island as a whole allowing heritage to be protected and promoted from all community perspectives through this very beneficial and timely resource. 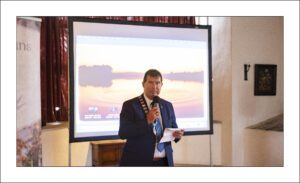 Chathaoirleach, and Council Councillors from Mid Ulster and Donegal County Council, PEACE officers and representatives attending the launch of the Ancient Clan website and The Battle of Benburb Film 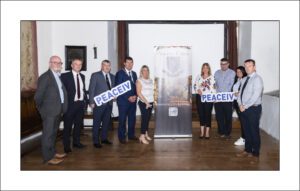 Donegal: Introduction to The Battle of Benburb by Dr Pádraig Lenihan,
National University of Ireland in Galway

Dr Pádraig Lenihan, NUIG acted as the historical expert to guide the making of The Battle of Benburb Film, providing the details of the battle and the script for the voiceover. Dr Lenihan was unable to attend the event personally at Donegal Castle but recorded an introduction  before the film was shown to the audience at the launch.

Dr Lenihan both enjoyed and learned from being involved in the project the professional and the skills which made this film such a success.

1646 is a ling time ago but it is important to remember as a human tragedy where over 3000 men lay dead or dying on the battle field. Benburb mattered because the Scottish Covenant army attached the Confederate Catholic regime but were stopped in this battle won by Owen Roe O’Neil. There is something heroic about the Ulster army who stood, fought and won which is loved back on as a period of courage. 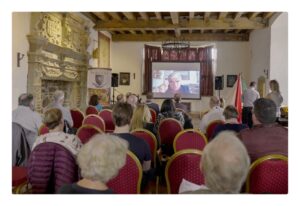 Donegal: Showing of Ancient Clan website and The Battle of Benburb Film

A demonstration of the website was given by David Bell, a Mid Ulster Forum member, followed by a showing of The Battle of Benburb Film. 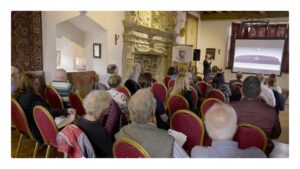 Councillor Cora Corry, Chair of Mid Ulster District Council officially launched the Ancient Clan website and the Battle of Benburb Film in Benburb Priory. Councillor Cora highlighted that to know where we are going, we need to know where we’ve come from, and this brand new website certainly gives anyone interested a great insight into the rich heritage of the ancient clans shared between Donegal and Tyrone.

With thanks to funding through Council’s Good Relations service from the PEACE four cross border shared heritage project, and not to mention the hard work of all those involved, this fantastic online resource beautifully and comprehensively illustrates the shared heritage of the O’Neill and other ancient clans and the Plantation of Ulster. The images, information and interactive map will encourage residents and visitors alike to find out more about where and how their ancestors lived, and the web of connections between the two counties.

The History Heritage Forum members involved in the project have worked extremely hard to ensure this legacy was developed, and in addition have formed groups linked to ancient clan names. In doing so, they are sharing their history, genealogy and culture locally and across the world. These digital resources have truly put this history and heritage on the map for generations to come! 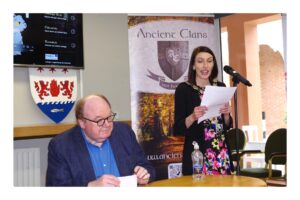 Professor Gerry McKenna, Chair of the Library & Museum Management Board welcomed the Mid Ulster and Donegal Heritage Forum and other guests to Benburb Priory and added to the significance of promoting our heritage sites to protect them and share their history from all community perspectives.

A demonstration of the website was given by Heather McLaughlin, Ancient Clans project coordinator followed by a showing of The Battle of Benburb Film. 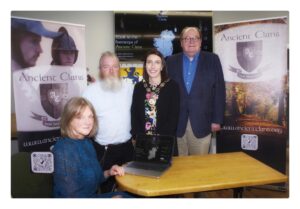 Introduction to The Battle of Benburb by Dr Pádraig Lenihan,
National University of Ireland in Galway

Dr Pádraig Lenihan, NUIG acted as the historical expert to guide the making of The Battle of Benburb Film, providing the details of the battle and the script for the voiceover. Dr Lenihan was unable to attend the event personally so provided a recorded introduction before the film was shown to the audience at the launch.

He explained how proud he was to be associated with the making of the film, the authenticity and the power of the project. He emphasised the importance of making people aware of a battle in which 3000 were killed in one evening in June 1646. It is part of a struggle between native and newcomer, settler and native.

The legacy of this and following wars is not to forget the past but deal and engage honestly and respectfully with the past. The Benburb event is important because it ensured the survival of the Confederate Catholics. Owen Roe O’Neil the winner at Benburb is an important story but so is the story of Monroe and paying due respect to both traditions. 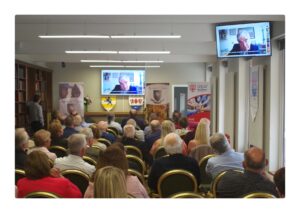 The Making of the Battle of Benburb

One of the main components of this cross border heritage program between Mid Ulster and Donegal is to raise awareness of the invaluable heritage sites in each area and to promote them to to increase awareness and access from wider communities at these shared space sites. As part of this Mid Ulster District Council supported the production of a short film re-enacting which took place in Benburb on the 4th June 1646. The production was filmed at Benburb Priory. 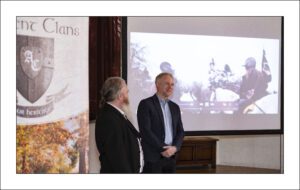 Viewing of The Battle of Benburb Film

Following the official launch of the Ancient Clan website the audience views The Battle of Benburb Film for this first time. The film, is a short 12min film which  the main details of the battle with living history actors portraying battle, marching and encampment scenes. 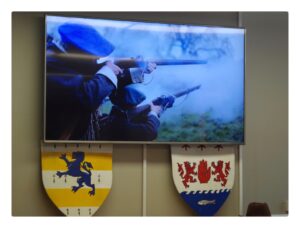 From 10th – 11th September properties across Mid Ulster will open their doors for free as part of European Heritage Open Days, an annual celebration of local architecture, history and culture. Over 20 properties will offer free entry across the weekend, with many also enhancing the visitor experience with living history tours.

The open days are a once-a-year opportunity for curious families, architect lovers, and heritage enthusiasts to explore buildings and exclusive sites that are rarely open to the public.

Details on how to book for individual events in the Mid Ulster area can be found on the Visit Mid Ulster website. 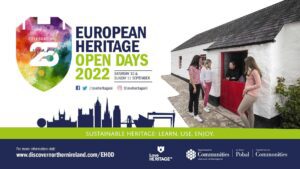